There are ten Sprite Sister volumes:- 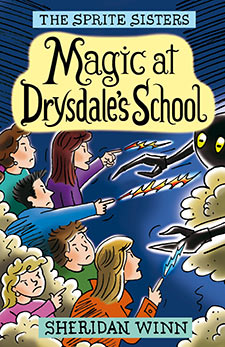 It’s the autumn term at Drysdale’s School and Zak makes a strong impression at his new boarding school – not all of it good. A few weeks before, he used his dark magic to summon the terrifying invasion of screeglings to Sprite Towers.

Nervous of what Zak may do next, the Sprite Sisters keep a wary distance from him at school. Despite her anger, 14-year old Marina still finds herself drawn to the troubled boy when they come face to face.

Meanwhile Flame, 15, anguishes about having to keep her magic power secret from her boyfriend, Quinn.

When Ash’s power of Earth draws her to a mysterious stone in the school grounds, she feels it holds the key to a magic pathway. Zak is not far behind her, and senses that something in this pathway will help rid him of the dark power that is consuming him.

With time running out for Zak, the Sprite Sisters and their cousin Verena must find a way into the magic pathway – but much more than any of them had ever imagined awaits them there.

To buy the paperback or e-book on Amazon click here