The idea for a series of books about four sisters with magical powers aligned to the four elements, popped out at 1.30am on 22nd January 2007. Sheridan Winn was writing her diary and noted down the one-sentence idea. When she woke next day, she had the certain feeling that this was a good idea – the one she had been waiting for. She approached Piccadilly Press’s Brenda Gardner, who agreed, and commissioned The Circle of Power. Although everything then seemed to move very fast, Sheridan had waited many years to start writing stories. 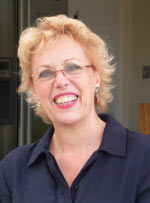 Sheridan was born in Norwich, Norfolk. When she was six years old, her family moved to a big, rambling house in the country. Littlewood House became the inspiration for Sprite Towers. The eldest of four sisters, Sheridan drew on a many of her childhood experiences for the Sprite stories – such as camping out in the old white caravan in the woods. As a child she loved to be outside learning about the natural world and looking after her animals. At the age of twelve she went to boarding school, which taught her to be independent.

She studied graphic design at art college and for her degree wrote a thesis on Norfolk barns. The thesis was turned into a book and published a few months later as, ‘Barns & Granaries’ by Boydell Press & Anglia Television. Sheridan then took a postgraduate teaching certificate and spent some time working in Norfolk schools as a supply teacher.

For 25 years she worked with author and illustrator, Chris Winn, as his business and creative manager. Together they produced a number of children’s picture books, along with the ‘Mad Gadget’ cartoon – the most popular strip in the Daily Telegraph’s Young Telegraph for over seven years. Mad Gadget followed the adventures of a crazy boy inventor and was based on their son, Alex, along with their daughter, Rosie.

In 2001, Sheridan became a freelance journalist specialising in profiles of business leaders and lifestyle features for international newspapers and magazines. Today she divides her time between freelance work and book writing. 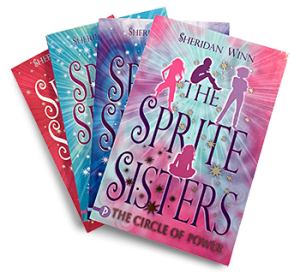 Between 2008-2010, Sheridan published five Sprite Sister books: The Circle of Power, The Magic Unfolds, The Secret of the Towers, The Ghost in the Tower and New Magic (all published by Piccadilly Press, originally). These stories take place within one year when Flame is 13, Marina is 12, Ash is 10 and Ariel is 9. Sheridan bought back the rights from Piccadilly Press and re-published the series with the new jackets by Chris Winn, also adding more titles.

In 2012, Sheridan self-published the sixth title in the series, The Boy With Hawk-like Eyes, as a paperback and e-book, and bought back the rights to the first five titles from Piccadilly Press. She then set about re-publishing the stories herself, with new-look jackets – so became publisher and a bookseller, as well as a writer. Vol 7, Magic at Drysdale’s School, and Vol 8, The Mystery of the Locked Room, followed, which are available in English. Since then, Sheridan has written Sprites Vols 9 & 10, along with three prequel stories, which are published in German for the time being.

The Sprite Sisters series has been hugely successful in Germany, where the books have sold over 500,000 copies and are known there as Vier Zauberhafte Schwestern.

In 2014, Sheridan wrote Boudica’s Daughters, a YA novel set in Norfolk’s Breckland, in which a psychic teenager connects with ghosts to solve an ancient mystery and help her damaged sister.

A lively and engaging speaker, Sheridan enjoys the chance to interact with her readers. She lives in Norfolk and has two grown-up children and a grand-daughter. She has a keen interest in the Arts, particularly painting and film, and finds walking in the countryside a good way to think up ideas. She always carries a notebook.

This message is only visible to admins.
Problem displaying Facebook posts. Backup cache in use.
Click to show error
Error: Error validating access token: The session has been invalidated because the user changed their password or Facebook has changed the session for security reasons. Type: OAuthException

Book online via link in bio or at https://www.eventbrite.co.uk/e/a-christmas-carol-by-ashley-ramsden-storyteller-tickets-277566407597